The Continent of Eugios is in the northern hemisphere of Kelara, and made up of nine nations populated by a range of races, with the most populous being humans, elves, halflings, and dwarves.

Home to the largest centre of education and magical research in Kelara, the city of Osraco, capital of the nation of Awrawrene contains universities, religious centres, magical research, and more. The city is perhaps the most multicultural city int he world, with students travelling from all around to study under the most eminent professors available.

Eugios has reached a point of relative peace in recent years, after generations of tension between nations. Throughout the warring years, the nation of Estrana, isolated and secure in the north, became somewhat of a haven for refugees in different nations, and so is a melting pot of diversity.

South of Estrana are the nations of Gules and Shazia, and the most strained border in the present day. Gules, ruled by the Orc King, Xig, is a nation populated heavily with those considered to be more ‘monstrous’ peoples. Primarily inhabited by orcs, the nation plays host to significant populations of goblins, hobgoblins, and bugbears. A noteworthy population of humans also reside within the Gules border, primarily occupying the city of Darkwell. With the west of the nation surrounded by mountains, the nation claims ownership of a significant portion of land to the east including the plains leading into Estrana. 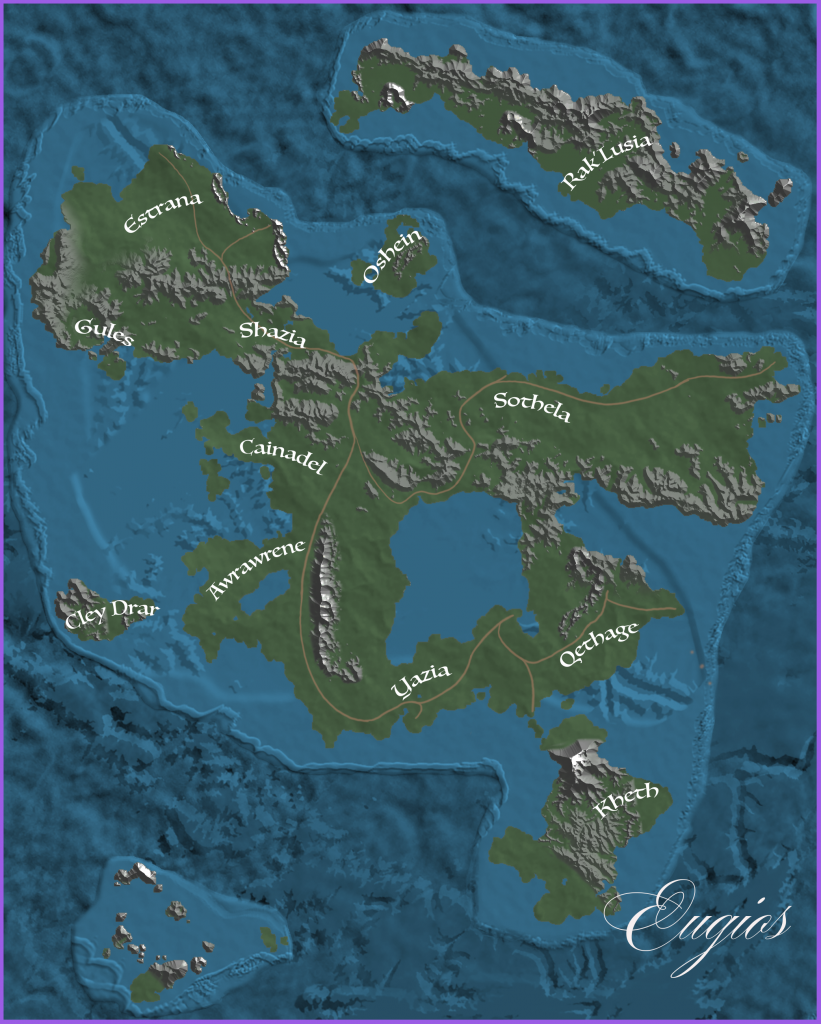 Shazia, ruled by the mage-king Irius lies to the south of Estrana, and lays claim to the trade route into the northern nation, whilst disputing its western border with Gules – a border lined with several fortified outposts to protect against further encroachment. A nation primarily populated by humans, the Misty Woodlands in the nation’s north-west region is home to small populations of elves, gnomes, and halflings, the latter of which have extended their presence and occupy a significant amount of farmland south of the woods.

To the south of Shazia is Cainadel, a nation whose three ruling families form The Triad. The three families, the Slatelights, the Snowswifts, and the Bluerunners have ruled in triumvirate for three hundred years since seizing control over what was previously a democratic process designed to prevent autocratic rule. An almost exclusively human population, Cainadel has a reputation for xenophobia and whilst they avoid political and mercantile isolation, outsiders are viewed with a cautious eye.

The Grand Empire of Sothela is made up of four main population groups. The humans of the City of Stalross, the dwarves of the Gold Highlands, the elves of the Jade Grove and the nomads of the Camore Plains in the far east of the nation. Once its own nation, Camore and Sothela merged their royal families in marriage four hundred years ago, a show of solidarity against increasing concerns from the nation of Qethage to the south. The four population groups each have a strong element of self-governance, with Empress Octavia a figurehead to provide guidance when needed.

Qethage, the youngest nation on Eugios was once a scattered group of tribes and villages prior to unification under the charismatic elven warlord, Victorianus. Victorianus led a conquest through the lands, bringing the various independent states under a single banner. His rapid conquest led, in part, to the merging of the nomadic nation of Camore with their western neighbour Sothela to provide added security in case his hunger for conquest was not sated. When Victorianus died, the nation’s unification remained but with no named successor, a game of power and usurpation has been played for over two hundred years. The current emperor, Vosjean, is a half-elf who assassinated the previous ruler three years ago.

West of Qethage is the nation of Yazia. Bordered by Awrarene to its west and Qethage to its east, Yazia’s strength has come from its connection to the water, both the Enchanted Sea in the south and the Inner Sea in the north, an enormous lake in the centre of Eugios rumoured to be the location of an ancient mountain that in ages past was sunk by some great upheaval. Yazia’s naval forces are renowned beyond Eugios’ borders, and it has grown wealthy on being a safe location for sea merchants to travel to and from.